Jessica Bull was a bit shocked when she saw the Academy of Interactive Entertainment’s Sydney campus. It occupies the top floor of the grandstand at Wentworth Park, where Ultimo meets Glebe near the Sydney Fish Markets. AIE students study game development, 3D animation and visual effects. On race nights, bookies occupy the grandstand’s ground floor opposite the tote, punters, trainers and owners mill about and the dogs chase a lure.

In the 1970s, the Wentworth track was the place to be – upwards of 7000 people packed the park on race nights and in the 1980s the grandstand’s private suites catered to Sydney’s heavy drinking hoi polloi.

The advent of off-course betting killed the crowds, and racetrack administrators had to look elsewhere to pay the rent.

Geeks and greyhounds are an offbeat if successful mix, and each day hundreds of students pack into the grandstand’s top floor offices and suites, learning to create digital worlds of wizards and warriors.

“It’s a great view across the track and the green,” Jessica says. “I’ve been here late some nights and watched the dogs racing. It has opened my eyes to parts of Sydney I’d never encountered.”

After class, she rubs shoulders with students from a wealth of public and private colleges and universities who are breathing new life into a once-drab area. The area from Haymarket to Glebe taking in Chippendale, Ultimo and Pyrmont forms a valley to the harbour where buildings are increasingly being occupied by newer, and smaller, places of learning alongside the campus giants of Sydney University, the University of Technology, Sydney, and Sydney TAFE Ultimo.

In an arc from Haymarket to Glebe, bound by the University of Sydney at one end of Broadway, the University of Technology, Sydney, and Sydney TAFE Ultimo at the other, is a valley running to the harbour where old buildings are increasingly being occupied by students.

“The area has a real buzz about it. The game nerds and the beauty students in green and red hair and crazy make-up get on well,” says Jessica Bull, a student at the Academy of Interactive Entertainment, which leases space in the Wentworth Park grandstand, home to greyhound racing.

Billy Blue College of Design has just opened a campus in Mountain Street, Ultimo, joining its partner, the CATC Design School, in a converted heritage building. The design schools’ owner, Think Education, also runs the Australasian College of Natural Therapies in nearby Pyrmont. 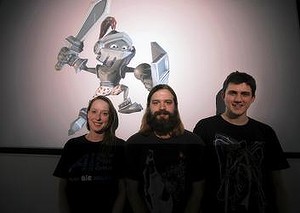 Western Australia’s University of Notre Dame has its Sydney campus at the old St Benedict’s Church grounds on Broadway and in adjacent Chippendale. Curtin University has a Sydney toehold in the old Art Deco Berlei building, makers of bras and corsets, in nearby Regent Street.

Technology firms, television companies and start-up creative agencies have moved to the area, too, including DDB Group, Interbrand, Epiphany Games and Fishburners. At the harbour end, warehouses built to serve the docks trade are thriving hubs for design companies, the Lend Lease redevelopment of Darling Harbour is to include student accommodation and at Broadway, the old Carlton brewery site turned Central Park apartments will have student housing. It’s a knowledge valley, of sorts, and it is thriving.

“It has become the funky end of the city with lots of exciting developments on the way,” says Dr Tim Williams, CEO of the Committee for Sydney. “It’s becoming the digital precinct of Sydney and all the education outlets in the area are part of that.”

The AIE’s Simon Freeman says his game students often collaborate with music students at the Australian Institute of Music, on the other side of Central to create soundtracks for their games. “We’ve also worked with the students at The Make-up Technicians (TMT) school in Haymarket, who help compose facial make-up for computer characters.”

In 2011 the FBI Fashion College took over the old Glebe Post Office as part of its expansion, its students adding a capital T to trendy Glebe. On Paramatta Road at Glebe is Bedford College, where students study for a child care diploma. Just near the Broadway Shopping Centre is International Grammar School, too.

Much of this “knowledge valley” used to be swampy marshland. Broadway, and where Sydney University now stands, was once farming land. Then industry moved in: refineries, wool stores, mills and power stations, and Pyrmont was quarried for its fine sandstone. Cottages were built to house workers and by the 1890s Pyrmont and Ultimo had become a densely populated area. In the second half of last century, the area was down, but fast forward to today and this fringe of Sydney combines high-density living with a concentration of education providers and businesses.  Read more HERE