What’s On Chinese New Year of the Rooster 2017

What’s On Chinese New Year of the Rooster 2017

Sydney’s Chinese New Year 2017 has begun with the Year of the Rooster. Regarded as one of the biggest Chinese populations outside of China and also too one of the most significant CNY Celebrations globally, the city will be illuminated in the bright red colour during the spring festival (Lunar New Year) and a lot of events are scheduled to take place.

Westpac is painting the city red

In preparation of the Year of the Rooster, Sydney has collaborated with Westpac, which is celebrating its 200th anniversary in 2017, to illuminate the renowned icons of the city in the bright red colour, the colour of happiness, good fortune and joy. For three nights, Jan. 27, Jan.28 and Jan.29, the city including the popular buildings will be lit in the colour, which is believed to ward off evil spirits, to launch one of the largest celebrations of the world – the Lunar New Year. The building that will be illuminated in red include:

Westpac will host an event called Wall of Fortune, where every minute about six hundred New Year messages will be displayed on a two-metre tall and eight-metre widescreen at the Circular Quay. People can share their messages on social media using #westpaclunar.

Westpac Lunar Lantern Hub will include 50-metre canopy of red lanterns at Martin Place. Furthermore, there will be food DJ, music and entertainment offerings as well. Chinese games will also be played at The Star’s Mahjong Garden. On Feb.3, a grand party will be hosted that will include lion dances, community performances, karaoke as well as live music. Visitors are welcomed to join the celebration of the Chinese New Year 2017.

Australians can enjoy evening markets and Asian cuisine at the food festival, which will be held for 11 nights (Jan.27 to Feb.5) at the Sydney Morning Herald lunar markets located at the Pyrmont Bay Park, Pyrmont. Presented by The Star, the festival will include outdoor dining and entertainment accompanied with live music. The schedules for the same are:

Lanterns have a huge significance during Chinese New Year celebrations. The 15th day of the lunar year is celebrated as the Lantern Festival as it is the first full moon night of the year. People light up paper lanterns and go to temples to worship. The day is still considered to be equivalent to Valentine’s Day in some places such as Hong Kong and Taiwan.

Sydney is also celebrating the Lantern Festival by lighting up larger-than-life animal lanterns. These 10-metre tall animal-shaped lanterns (rooster, sheep, dragon, snake, dog, rat, monkey, ox, tiger, horse, pig and rabbit) have been designed by Asian-Australian artists along with Festival Curator Claudia Chan Shaw. They will be lit up around the Circular Quay.

Furthermore, a pentatonic rooster lantern, which is inspired by the five-note pentatonic musical scale and traditional Chinese instruments, can also be observed on the Dixon Street at the Haymarket from Jan.27 to Feb.12 to mark the Year of the Rooster. This particular lantern will be designed by renowned Beijing-born artist Tianli Zu.

Live dance and cultural performances will be observed at the Westpac Lunar Lantern hub as well as at the Customs House at the Circular Quay (on Jan.27-28, Feb.3-4 and Feb.10-11). About 1,000 participants will perform traditional dances including Chinese, Japanese, Korean and Thai cultural dances. The performances will be choreographed by Performance Director Virginia Ferris under the guidance of festival curator Claudia Chan Shaw.

Lion dances accompanied by the thunder of firecrackers will be performed at the Sydney’s Chinatown at the Dixon Street. Firecrackers are an important part of the Chinese New Year celebrations, believed to ward off bad fortune. On the other hand, a lion dance is considered as a symbol of good luck because a lion is thought to be an auspicious animal. There will be two performances of 15-20 minutes each every night from 6:00 to 6:30PM. Here are the schedules:

The celebration for Year of the Rooster also includes lion dance performances by the Dixon Street Chinese Committee. Timings for the same are 12PM-4PM on Saturdays and Sundays (Jan.8, Jan.14, Jan.15, Jan.21, Jan.28 and Feb.5).

Enjoy Sydney and the festive Rooster Year ahead. 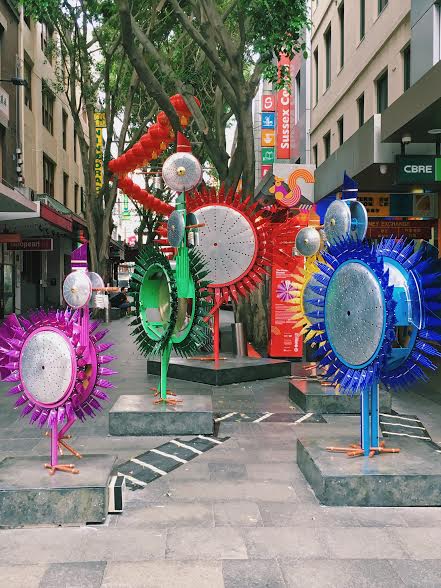