Market of Lights 2016 launches in south Dixon Street on the evening of Friday 3 June illuminating the heart of Chinatown with 38 tree loving Red-fire Monkey Light Sculptures.

The Light Sculptures are based on ancient Chinese lantern making methods combined with cutting edge digital design and fabrication technology.  Make sure you visit south Dixon Street during these 10 (monkey) magical nights and enjoy the culture and mischief of these auspicious luminous Monkey Sculptures.

As an initiative by Haymarket Chamber of Commerce (HCC) with the support of the City of Sydney, Market of Lights will be an annual event in Haymarket to highlight and celebrate Haymarket’s diverse cultural community of over 16,000 residents and as one of Australasia’s leading destinations to work, invest and visit.

HCC commissioned international architecture firm Laboratory of Visionary Architecture (LAVA) and lighting designer Michael Day, Lecturer,School of Design, UTS,  to curate the installation to design and create the life size monkeys which are made of a lightweight fully recyclable lampshade material, polypropylene. Low energy LED lighting will bring the sculptures to life.

HCC President Simon Chan says, “Market of Lights will become a key event in Sydney’s CBD to highlight the city’s most diverse, exciting and culturally rich precinct.  HCC are proud to launch this cultural showcase of innovation, art, light and culture in the heart of Chinatown along Dixon Street.”

“LAVA is pleased to be working within the historical and culturally diverse area of Haymarket through the language of art and light with this installation.  A popular figure in Chinese culture, mankind’s closest relatives – many of the world’s monkeys, apes and other primates — are in danger of becoming extinct, so we also hope to draw attention to their plight,” LAVA’s Director Chris Bosse said.

The installation for the Market of Lights, Haymarket will launch during the Vivid Light Walk with more than 60 spectacular light art installations, large-scale illuminations and mesmerising 3D-mapped building projections. 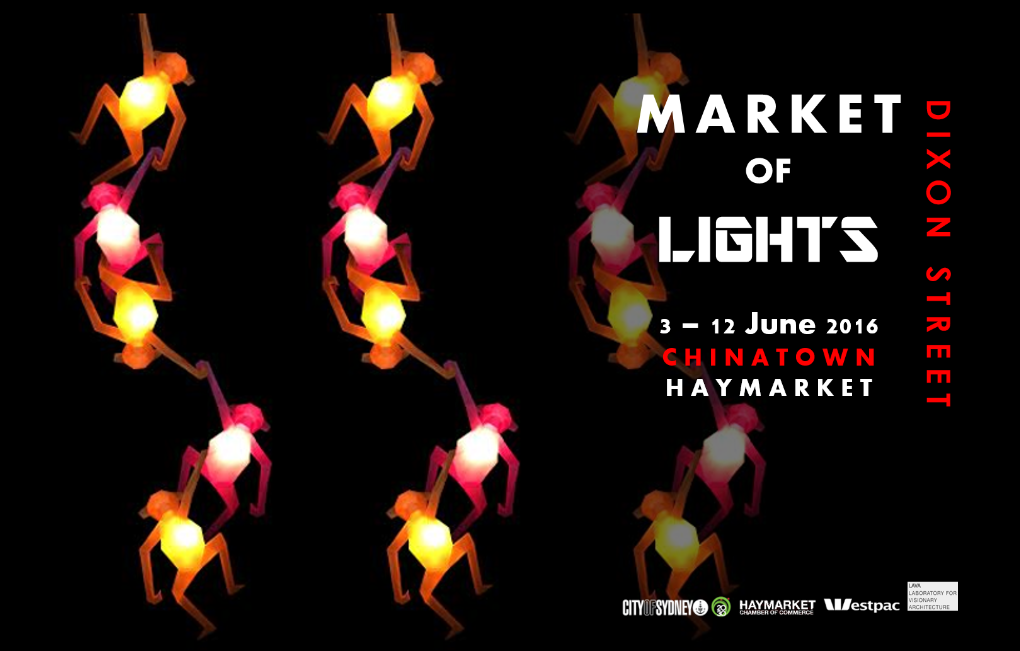 About Haymarket Chamber of Commerce

Haymarket Chamber of Commerce (HCC) is a not for profit organisation committed to the commercial and culturally diverse growth and development of its communities throughout Haymarket’s Chinatown, Thai Town and Korea Town.  This unique precinct is one of Australia’s leading destinations to live, work, invest and visit, attracting over 1 million visitors annually and representing 16,000 residents and over 40,000 workers.   HCC aims are to support the commercial and cultural diversity across Haymarket’s local businesses, visitors, residents and investors to encourage economic growth, cultural transformation and to maintain a sustainable, resilient and connected local community and market place.

Over the next five years, we will experience a historic transformation with investment, tourism and local and international population growth.  Haymarket’s evolution from its traditional base as Sydney’s Chinatown to an expanding precinct that will see new infrastructure,increased public transport and new residential and commercial developments to become the most innovative and culturally diverse metropolis of South East Asia.

Over the last 150 years the Chinese community’s emergence, throughout Sydney’s CBD, has centrally gathered in Haymarket’s Dixon Street and is infamously described by the community as the head of the dragon body. As early as 1818 the first wave of Chinese gold rush arrivals in the 1850’s attracted clusters of Chinese residents and businesses into the city, where they moved up the sandstone spine of the CBD from the Rocks, through to the old Haymarket site at the bottom of Surry Hills and are known now to be placed along Dixon Street and its surrounds.  Some suggest that Chinatown in Dixon Street maybe older than Hong Kong.  Growing and diverse in nature with the many Chinese provinces expanding into the area, this group is a mobile, transforming community in the city.

It is here in Dixon Street in the 1980’s following global trends in urban place making, that the gates of Chinatown with their on guard Lions were placed to celebrate Australia Chinese Friendship between Guangzhou and Sydney.

2016 marks the 30th anniversary of the Sydney-Guangzhou sister city relationship and the historic ties it represents for some of the first Chinese in Australia.  Both economically dynamic port cities and financial centres, with thriving services and innovation sectors.

Established in 2007 as a network with a research and design focus and has offices in Sydney, Shanghai, Stuttgart and Berlin, LAVA merges future technologies with the patterns of organisation found in nature to build a smarter, friendlier, more socially and environmentally responsible future.

Using naturally evolving structural systems, such as snowflakes, spider webs and soap bubbles, for new building typologies and structures – the geometries in nature create both efficiency and beauty. But above all the human is the centre of their investigations.  LAVA combines digital workflow, nature’s structural principles and the latest digital fabrication technologies to achieve MORE WITH LESS: more (architecture) with less (material/ energy/time/cost).

LAVA designs everything from master-plans and urban centres, to homes made out of PET bottles to ‘reskinning’ aging 60s icons, from furniture to hotels, houses and airports of the future