Located in downtown Haymarket near Sydney’s central business district, Chinatown welcomes more than one million visitors each year. The culturally and historically rich area is the third-most popular tourist site in Sydney – so what makes it tick?

In just over 200 years since the first Chinese landed in Sydney, Chinatown has been the centre of the religious, social and cuisine cultures of the Cantonese from the villages of Zhongshan in Guangdong Province. They have brought with them the traditions of festivities such as Chinese New Year and the Mid-Autumn Festival (or Moon Festival). Widespread immigration in the past few decades has led to the overwhelming shift to other Asian communities from Thailand, South Korea, Japan, Malaysia and Indonesia.

Once the teeming centre of the storage yards of hay, corn and timber in the 1800s, and the huge produce and food markets in the 1900s, today the imposing Ceremonial Arches in Dixon Street open the gates to not only Chinese culture and influence, but a multicultural mix of businesses from food, technology, finance, and commerce.

“OVER THE 4 SEAS ALL MEN ARE EQUAL”

The City of Sydney celebrated Chinatown as a tourist attraction In 1980 by installing the colourful arches carrying the messages of Luck and Longevity in its traditional colours, and of the sacred animal effigies and Guardian Lions (hybrids of Dragon, Dog and Lion). 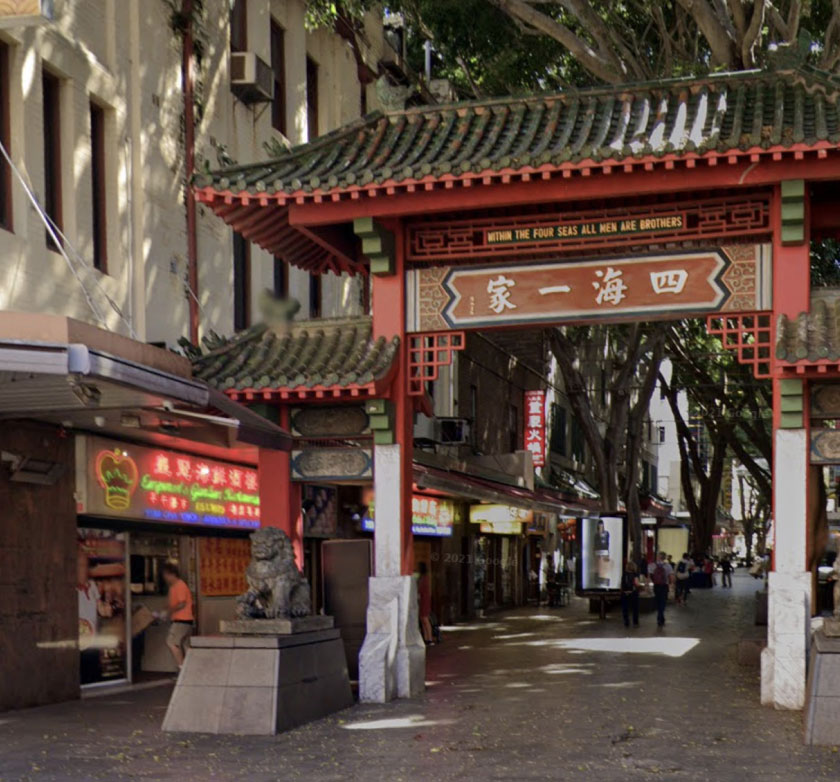 Located in Dixon and Thomas Streets, clan shops offered assistance to villagers of their own clans, mainly from Cantonese villages. The predominant language in Chinatown was Cantonese Chinese well into 1970’s, but today it is increasingly Mandarin Chinese. 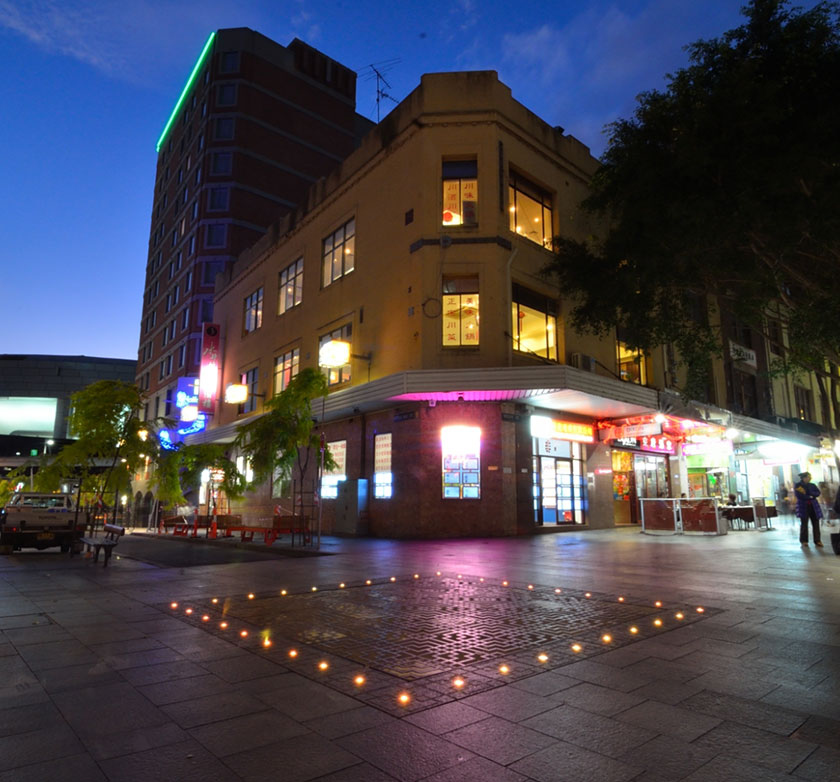 Chinese Medicine – The Centre Of Ginseng

Traditional Chinese medicine is the most popular treatment of common ailments with the use of plants and herb teas. Practitioners also offer acupuncture, acupressure and moxibustion. 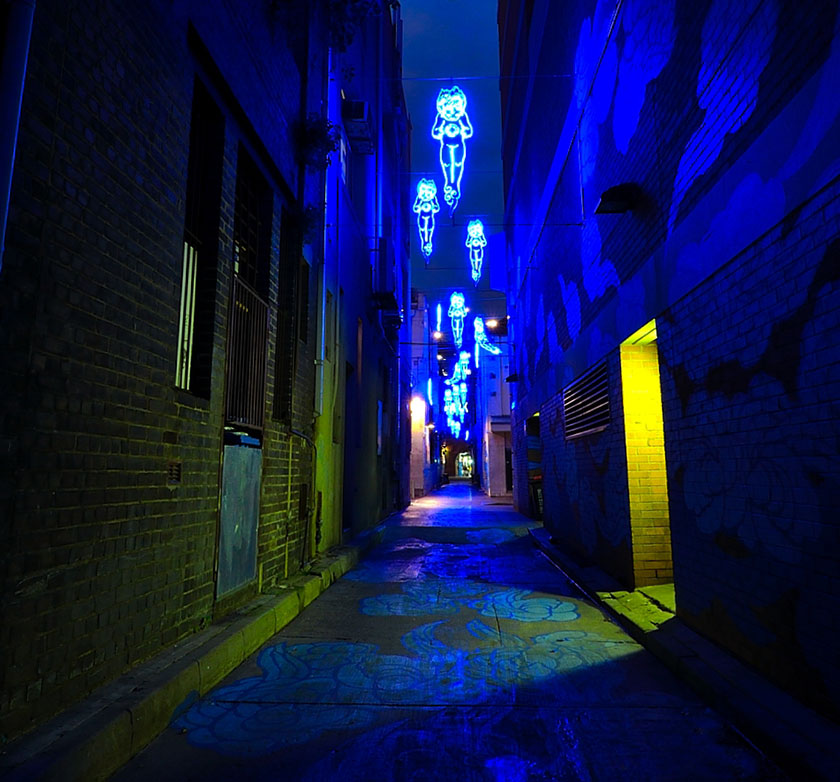 The Feng Shui belief of man’s time on earth and the powers of Heaven in the suspended colours of the light of yellow and blue (yellow earth and blue heavens). 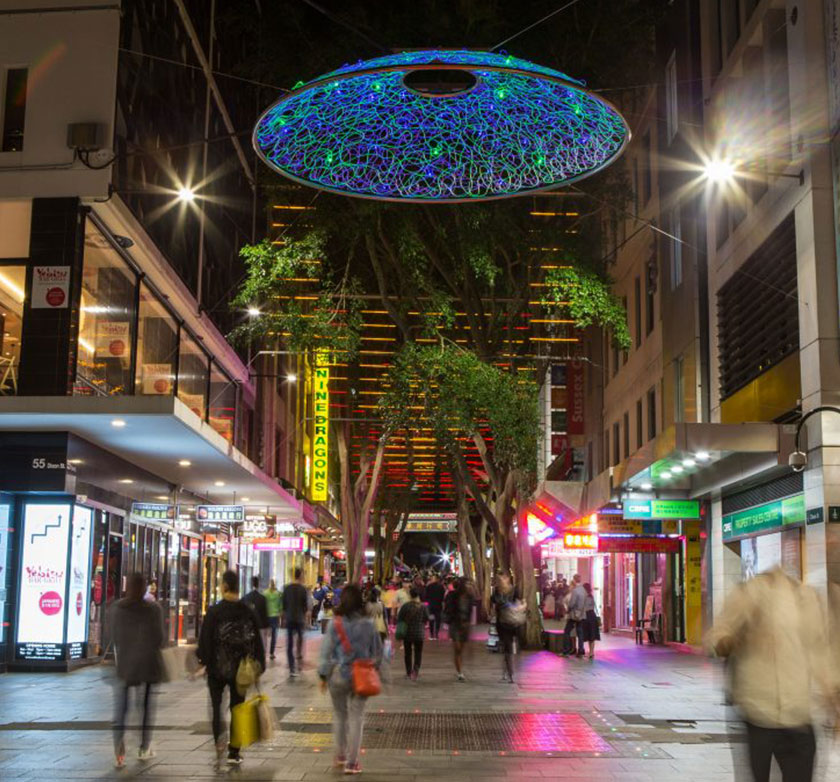 Designed by Aboriginal artist Jason Wing, depicting the cultures of Chinese and Aboriginal peoples. In death, one becomes a roaming spirit in the Heavens and the blue clouds mean good fortune. Kimber Lane was named after oyster farmer Pritchard Kimber in 1850’s.

Celebrating the 1988 Bicentennial as sister cities, the Guangdong Provincial Government and NSW Government built the Shang Dynasty Garden of 3000 years combining all the rich cultures of Feng Shui and Taoism – planted with the sacred trees and plants of China. 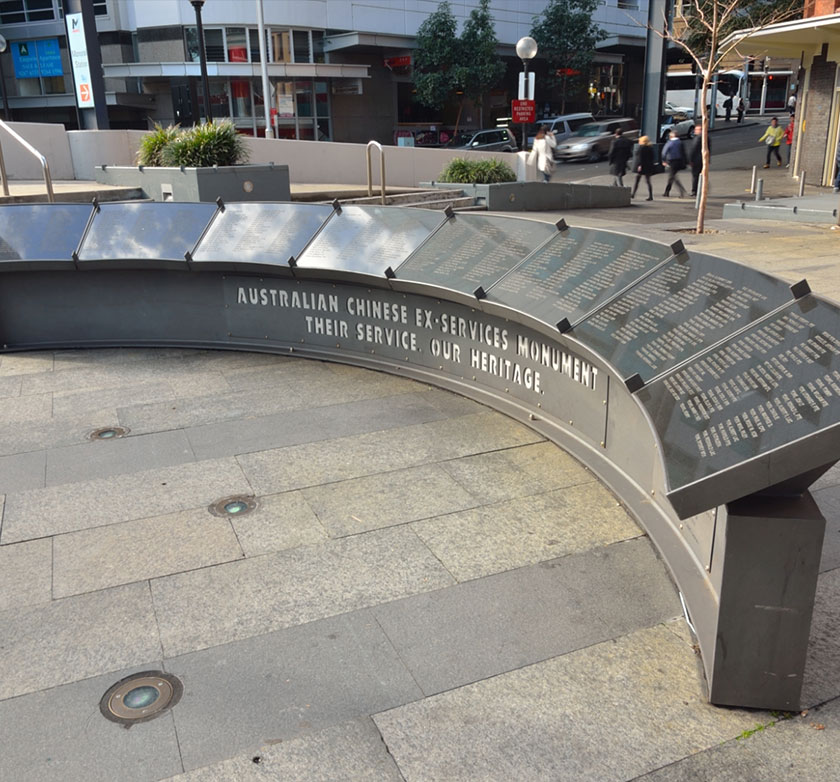 In the northern end of Dixon Street, the 2003 semi elliptical monument is testimonial to the Chinese Australian men who joined in the common cause for peace in all wars. 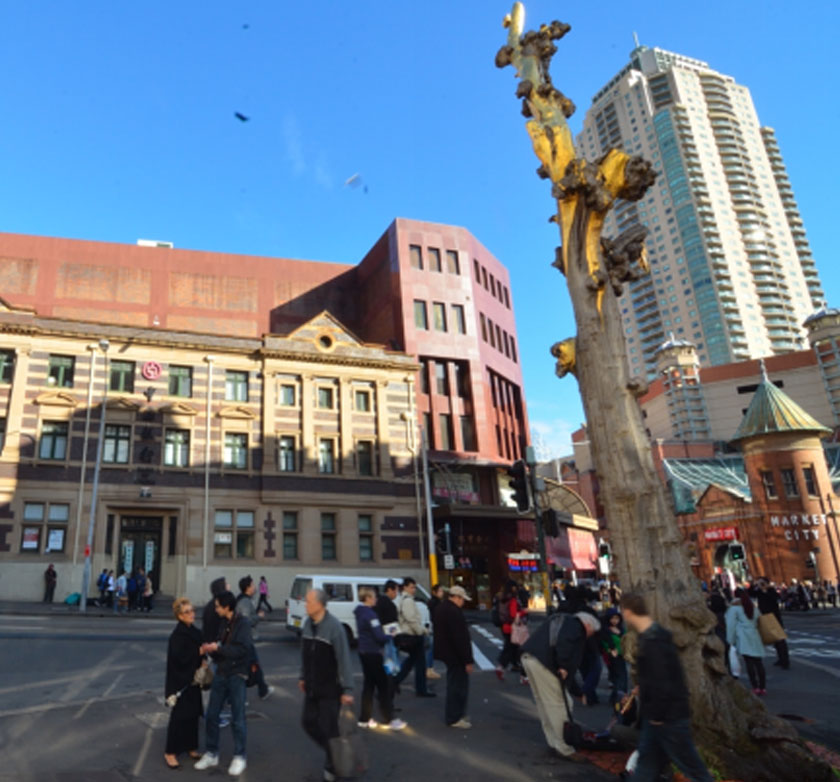 A typical miniature landscape Garden with the rocks (Scholar Rocks) and with the elements of Feng Shui – the White Clouds (water – life) based on gardens of ancient Tang emperors. The street sculptures have meanings in the Buddhist and Taoist religions. 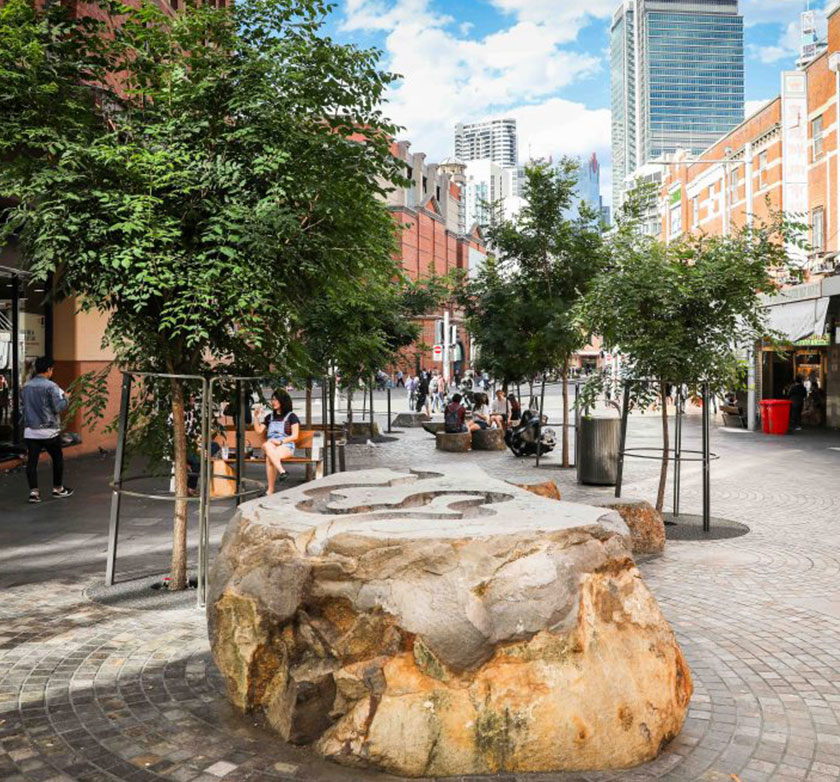 Food is the heart and soul of Sydney’s Chinatown, being the main attraction for visitors to the area. The diverse range of restaurants in Chinatown reflects the multicultural fabric of Australia, with a plethora of cuisines from different countries in Asia. Sydney’s Chinatown is perhaps one of the best food precincts in the world and certainly the variety and quality of Chinese regional cuisines on offer is unparalleled.

Reflecting the rich Cantonese history of Chinatown, eateries have traditionally been more Cantonese offerings, with restaurants offering yum cha and specialising in regional Cantonese fare. This has gradually evolved to more Thai restaurants with the creation of the nearby “Thai Town” near Capitol Square. Korean restaurants also prove to be popular as well as Taiwanese and Japanese cuisines. The growing influence of mainland Chinese investment and migration is also clearly evident, as there is now a large variety of cuisines from all different parts of mainland China on offer including the very popular hot pot restaurants. Chinatown is perhaps the bubble tea capital of the city, with more than a dozen stores in the area.